It was my last day in Busan, and I had saved to most demanding site for last. Today was the day I would trek to Seokbulsa Temple. This peculiar temple appears in many posts online, all of which praise its beauty. It was definitely worth the trip.

Want to know how to get there? Check out my post with detailed directions.

Okay! This was the goal of the trip. Want to know what’s over there? Stick stick around to find out! 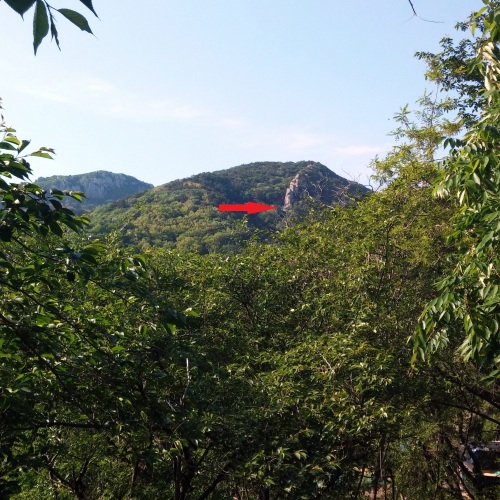 This is where you’re headed!

I was able to track down this temple’s history after extensive sleuthing. The history of Seokbulsa Temple is nearly impossible to find online and in English, but here is what I have pieced together. The temple was founded in 1930, during the Japanese occupation of Korea. This is unlike many of the other temples and sites on the mountain, which are all much older. A monk by the name of 曺-鉉 selected this location on the mountain due to the distinct rock formations which are made of sandstone. It was him who meticulously carved the stone for many years, and incorporated both modern and ancient aspects of Buddhist art into his work. The stone carvings are in great condition and are very detailed. Inside the temple grounds are some much older artifacts, but it is unknown where they come from or what the story behind them is. Please let me know if you can find out anything else about this wonderful temple!

I opted to take a ropeway to the top of the mountain then hiked mostly down form there. The lift has wonderful views of Busan and its surrounding area. It was a great way to see the city.

Looking back at a descending ropeway, Busan in the background

It was a pretty straightforward hike, and I had a website filled with directions to get me there. Only later did I learn that it was even easier than I thought. I passed a few sites on the way there, including the South Gate of the mountain top fortress: Geumjeongsanseong. This is the largest mountain fortress in Korea and was build in the early 18th century after repeated attacks from the Japanese. This fortress walls stretch for about 17kms along the peak of the mountain. Since the 1970s the fortress has been under constant restoration work, and was therefore in fairly good condition.

Chris at the Gate

Alyx at the Gate

As I navigated way to the temple, I must have looked a little lost because a group of Korean hikers ask me where I was going. I mentioned Seokbulsa temple and after a bit of discussion amongst themselves they told me to follow them. So I jumped in and followed this group of 3 down the mountain. Now Koreans have a reputation of being the friendliest people in the world and I saw them live up to this reputation over and over while in Busan, here on the mountain included. I never got a picture with them, but here we are hiking along a trail.

Following my friendly guides down the mountain

I eventually made it to my trail and the guides sent me off, while they took another path. I began a very steep decent following a steam. As I came around a corner, I saw this stream turned into a waterfall and decided that I had to take a break here. I climbed up the rocks to a dry spot surrounded by flowing water and had some Gatorade and took in the scene.

After a break on the rocks, I continued down, down, down. Soon the sound of water faded away, and the unexpected sound of cars began. I made it to a road. This was the last part of the journey! I climbed up this never ending road towards its end, but it continued even after countless twists and turns. Occasionally a car would pass by, but not without difficulty – they all struggled to climb the steepening road towards the top, some were parked before it got too narrow or steep, while others still tried to reach the very top. Below is a look down at some of the long hike. 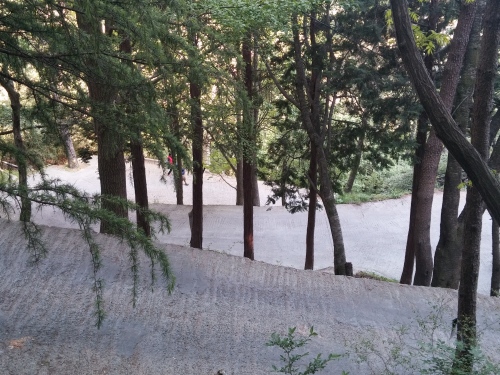 One of the steepest roads I’ve ever seen

The road wound up the mountain side, through a coniferous and bamboo forest until I finally reached my destination! The big tors jutted out through the trees and soon the temple itself came into view. 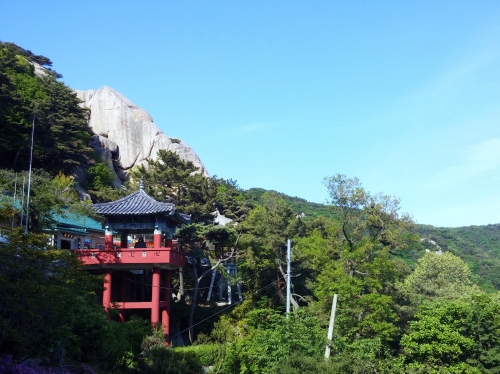 This stop had something I couldn’t find at any other site in Busan. This temple was quiet. Unlike some other parks or temples I went to, almost no one was here, no lines, and no one was trying to make a buck. It was truly and authentic experience. I walked through the gates and as I got closer, the scale of the rocks really came into view. Wedged between two large tors were two buildings, an area for prayer and a steep staircase leading to another area of worship. But the most significant features were the six statues carved into the sandstone rockfaces. They watched over each person entering the temple. Drag around this photosphere below to get a sense of my surroundings!

The temple colors were vibrant and the craftmanship was ornate. The details at this temple were well thought out. Everything from its location, to its views were spectacular. It was such a great way to end off my 3 day trip to Busan!

Here are some of the more notable photos from my trip:

Close of the the 3 in the sun 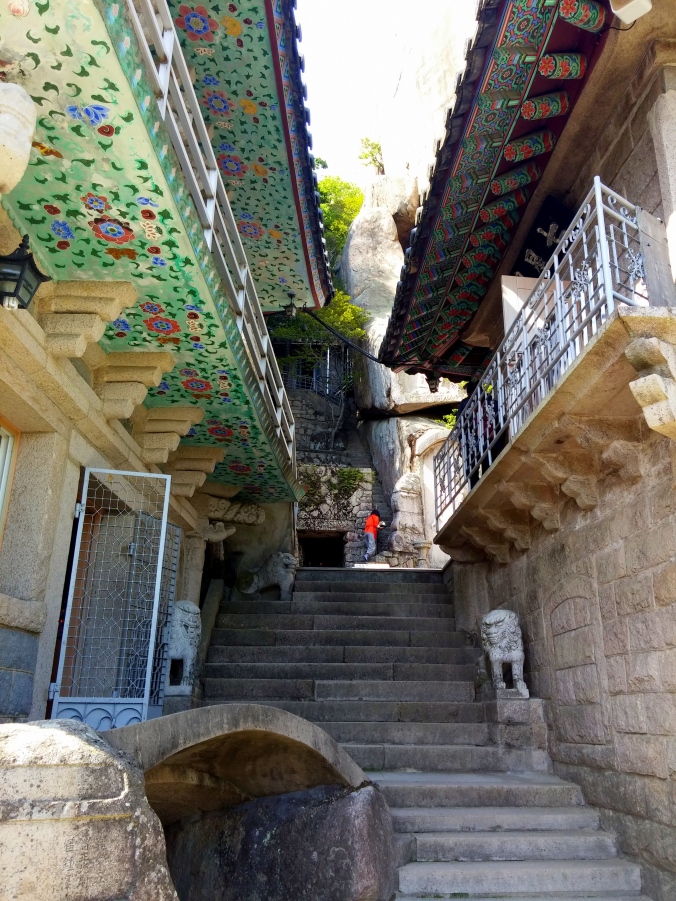 Looking into the temple area

After taking it all in, I chose to begin my descent. That part was surprisingly easy. I followed this one road down, winding through the mountain, through a small village, through a bigger village, and finally to a main road. From the main road I walked to a subway on made my way back into downtown Busan! 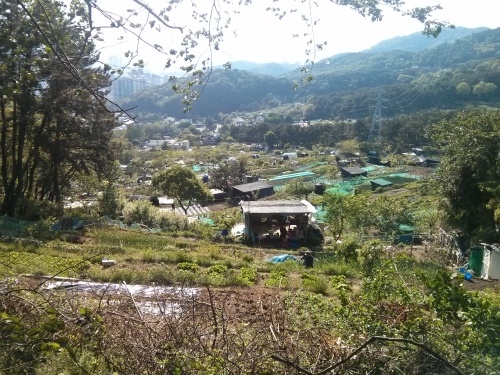 Duck Village on my way down

All in all, it was a great way to end my of vacation 🙂

7 thoughts on “A trip to real Korea: Seokbulsa Temple”