Working 6 days a week makes it a bit difficult to take trips anywhere in Vietnam that are more than a few hours drive. After looking at a map for attractions outside the city, I decided on Thay Pagoda. 1-1.5 hours outside of Hanoi by motorbike, I pulled into this sleepy town with limestone mountains shooting out of the flat ground all around it. I found a local café that let me store my bike for 10,000. Upon reaching the temple itself, there was a staircase leading up the mountain off to the left. Needless to say, I went up there to check it out. 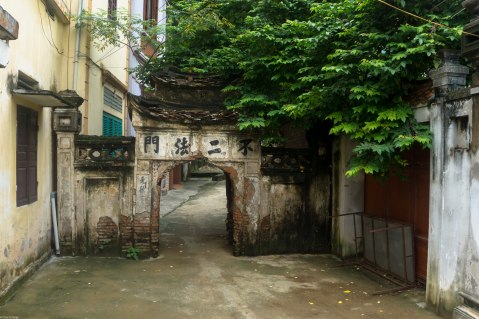 Gateway up the mountain

Smells in the air

A dragon comes out of the rock

At the to of the stairs, you’ll find a compact little hermitage with temples, a couple places to live and possible a study building(?). It was so peaceful and hidden from the village below. No one else was there, just the sound of running water and the smells of incense burning. But just as quickly as arriving, a local ‘tour guide’ found me and promised to take  me around to a cave. I was reluctant at first, but agreed because I couldn’t find this cave he spoke of on my own. The cave he spoke of was around the back of the mountain and down a few steps. It was WAY more significant than he made it out to be. Outside the dark opening were flashlights and snacks for those going inside. We climbed down the stairs into a large cavern and this cave opened up as, going further and deeper down. Part of me felt exactly like I was in Minecraft. The guide pointed out various formations that looked like animals (called Pareidolia if you’re interested). A little further into the cave and he mentioned that many soldiers had died here during a war with China. It was unclear which side he was talking about, but as we ventured deeper into the cave, a manmade shape came into view. He asked me to look inside this concrete memorial, and said something about 300 dead soldiers. I peered in through a small hole and saw skeletons! The box was filled with human remains! He probably could have given a warning or something hahaha. I later found out the name of the cave was Cac Co Cave. The myth was that General Lu Gia led his troops to hide in this cave when the enemy was nearby. Unfortunately, the enemy knew this and barricaded the soldiers into the cave, sealing their fate. The myth is that there are thousands of humans remains in the cave itself. 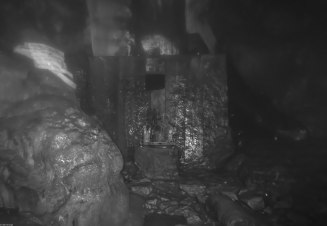 The memorial deep in the cave

Looking out through a large hole in the ceiling

Overall it was an unexpected trip and the guide turned out to be really helpful. I paid him a few hundred thousand (I think 200,000) and bought some good luck charms for his efforts.

It was about 4pm after leaving the mountian hermitage and cave. When I descended, Thay Pagoda was filled with students hanging out on bikes and some kids swimming in the pagoda in the middle of the lake for some fun. I zipped back to Hanoi and made it just in time for rush hour. I’d definitely recommend checking out this place for a day if you’re living in Hanoi.

A view of the landscape from the top of the mountain