The lake tour was probably the most touristy experience we had in Myanmar. On the other hand though, it offered us a glimpse of life that we couldn’t have otherwise accessed. Our tour guide’s name was Mo-mar (or something similar) and she was a self-proclaimed mother and wife for a family in a town up in the hills.

Her English was alright, but I like to think Alyx and I have gotten better at understanding broken English from teaching ESL.

We went to the jetty and met our boat and driver for the day. Then off into the lake we went. It was a 30 minute ride until we came near the villages. As the waters opened up we spotted a fisherman with his signature fishing net. Only he wasn’t a real fisherman. He waited at the mouth of a river for passing tourists then would pose as you passed. As it turns out, no one was fishing with those old nets and it seems like this man is only there for tourists, which is a little unsettling. But passed him and a little while later we arrived at our first stop. A bustling place nicknamed the ‘floating market’. It occupied a spot of a bit of land with marsh on one side and the lake on the other. 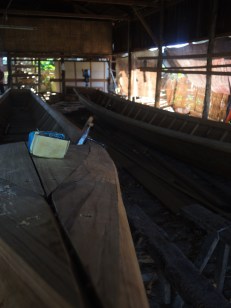 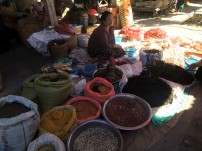 The place was alive and filled with people selling everything you could imagine. They had bootleg DVDs, sandals, fruits, vegetables, traditional snacks and candy, and lots more. Prices at this place seemed like what the locals paid. We bought a bag of Myanmar candy (rice cake and molasses) for about $0.20. Our next few stops focused on the local industry in the floating village in the centre of the lake. We saw a lotus and silk weaving studio, where the raw silk and lotus stems were turned into full garments in the same room. We also stopped at a woodshop where 4 people made boats to order for the village. We made a quick visit to a cigar rolling factory. It was 6 women who sat along the floor rolling various types of cigars at an astonishing speed. Flavours ranged from tobacco to banana leaf or anise. Then we visited a silver workshop where silver was smelted and turned into jewelry by a small group of workers. Each studio had the same formula to it: here is what we do, watch us do it, see the finished product, and buy it at the gift shop. Our last stop on the boat tour were the floating gardens. These were really something interesting. Bamboo rods held clumps of soil and water hyacinth together to form rows of land dense enough to grow crops on. It was like a very large, natural hydroponics farm. They grew all kinds of fruits and vegetables out here for the region. We passed rows and rows and crops in absolutely still water, with day huts scattered across the landscape.

Farm on the water

When all this finished up it was nearly 5pm and we were feeling the effects from the previous night’s bus trip. But it was December 31st and 2015 was only hours away! We headed back to our hotel for a special new years gift.